The area is well known for its stunning landscape and mountain views and is full of history, legend and quirky stories. These stories range from the legendry (the exploits of Cúchulainn guarding the Brown Bull of Cooley) through the tragic (the Long woman’s grave) to the downright bizarre (the leprechaun’s clothes that were found on the mountain). The village of Carlingford is located on the shores of Carlingford Lough and is overlooked by the Cooley Mountains. It is a bustling centre for sightseers, walkers and adventure activity enthusiasts. It has a large number of restaurants and pubs and has retained its medieval character. Carlingford and the Cooley Peninsula won the 2008 European Destinations of Excellence – Tourism and Intangible Heritage award. ﻿


Carlingford is a magical village, full of character and is one of the best preserved medieval villages in Ireland.   Raided by the Vikings in the 8th & 9th Centuries, historical records show that the Vikings occupied Carlingford Lough.  They may have used the sheltered harbour as a temporary base, though, this is unclear as no factual evidence, apart from the name Carlingford has been recorded.

With its history and narrow Medieval streets, lanes that lead to the harbour, majestic Slieve Foye mountain and the famous mountains of Mourne across the lough all combine to make Carlingford unique in Ireland.  Today the inherent natural beauty can equally be appreciated on land or sea. Guided walking tours, horse trekking through the mountains - sailing - yacht charter - windsurfing - canoeing - water skiing can all be enjoyed here in Carlingford.   Carlingford has 14 reputable restaurants & cosy pubs

Enjoy the spectacular panoramic views and listen to the wealth of myths and legends which makes Carlingford a unique holiday experience!.   Carlingford is at the centre of much more too,  within an hour's drive - Newgrange- famous 3000BC prehistoric burial chamber.  Proleek Dolmen - Portal tomb.   Visit Giant's Causeway - world heritage site,  within two hour's drive.

King John’s Castle was built in the 12th century on a rocky outcrop overlooking Carlingford Lough.   The Castle dominated the Lough, the harbour and the developing town.  This was the first stone building built in Carlingford and under the shadow of the castle the town grew.

It is said that King John of England stayed here for a few days in 1210 AD.
The original Castle consisted of an enclosed D-shaped courtyard with two rectangular towers at the entrance.   The eastern part of the Castle was built in 1261 and this included a number of rooms and a great hall.

The Tholsel
One of the last surviving gates into the town.  It functioned as a tollgate where taxes were levied on goods entering the town.  Originally it would have been a more formidable looking structure with at least two storys above the arched gateway.   From its design and the character of the stonework, the Tholsel appears to be of late-mediaeval date.

The Mint
This fortified Tower House was build by a wealthy merchant with stone, three storys high on a burgage plot, only the wealthy could afford to build a stone house.   The Mint dates from the 15th Century, and is an impressive building with lovely limestone windows, most probably inserted in the 16th Century.   Earlier windows were most likely made of sandstone.  Motifs with Celtic heads & knots are an example of the revival of interest in Celtic culture among wealthy classes.

Taaffe's Castle
This Tower House was constructed in two phases; the older portion was built in the early 16th Century.  It still has many original features.  The annex was built probably about 50 yrs later to provide more living accommodation.  It was owned by the Earl of Carlingford, Nicholas Taaffe, who was killed at the battle of the Boyne fighting with King James

Under the patronage of Richard de Burgo, Earl of Ulster the Dominican order establish the Friary in 1305, it was dedicated to St.Malachy. It was dissolved under Henry the Eight in 1530. Reoccupied by the Dominicans in the early 18th Century. 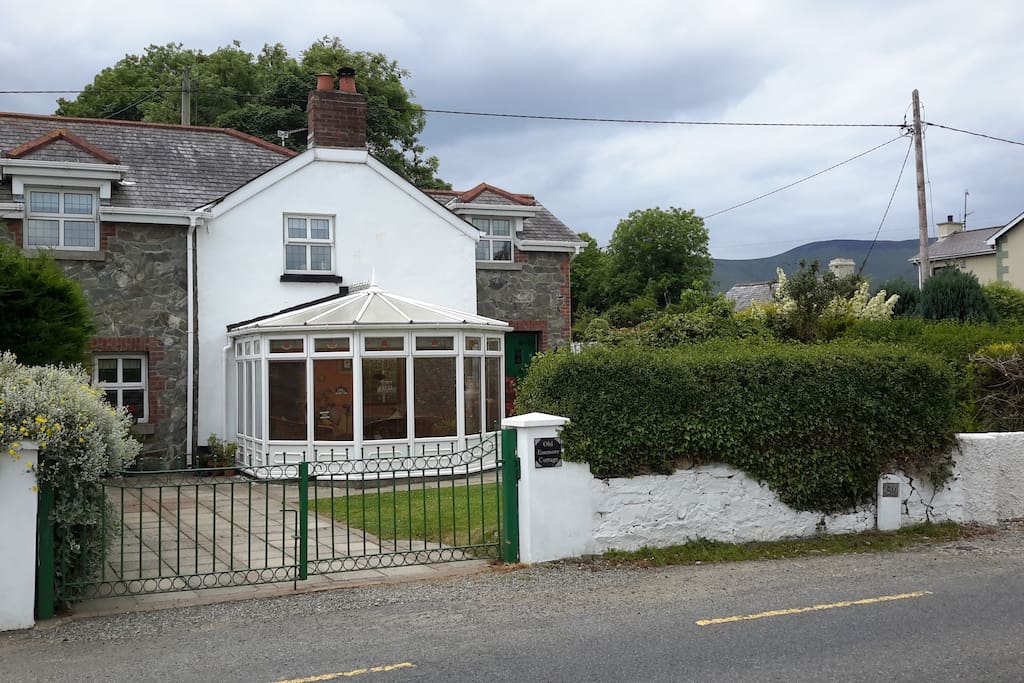 A picturesque holiday cottage on the east coast of Ireland, set on the shores of Carlingford Lough, overlooking the Mountains of Mourne and just a few minutes drive from the village of Omeath and t...

Find out what our guests say about us in our guestbook.